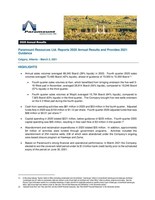 The Company's capital budget for 2021 is expected to range between $230 million and $260 million, excluding land acquisitions and abandonment and reclamation activities.  Over 60% of the capital budget will be incurred in the first half of 2021.  Approximately 85% of the 2021 program will be focused on advancing the Company's liquids-rich Montney developments at Karr and Wapiti. Approximately 70% of the 2021 capital budget is being allocated to sustaining capital and maintenance activities and the remaining 30% to production growth.

The Company expects 2021 sales volumes to average between 77,000 Boe/d and 80,000 Boe/d (45% liquids), slightly higher than preliminary guidance after accounting for first quarter dispositions of approximately 2,600 Boe/d of annualized production. (2)

The Company has budgeted approximately $31 million for abandonment and reclamation activities in 2021.  Approximately $6 million is to be funded directly through the Alberta Site Rehabilitation Program ("ASRP"), resulting in approximately $25 million net to Paramount. The majority of these funds will be directed to the Zama area.

Paramount has a long history of sustainable resource development and environmental stewardship and is committed to creating value for our stakeholders in an environmentally and socially responsible manner.  Environmental, Social and Governance ("ESG") highlights in 2020 include:

Paramount's 2020 annual results, including the Review of Operations, Management's Discussion and Analysis and the Company's Consolidated Financial Statements can be obtained at: https://mma.prnewswire.com/media/1448762/Paramount_Resources_Ltd__Paramount_Resources_Ltd__Reports_2020_A.pdf. A summary of historical financial and operating results is also available on Paramount's website at http://www.paramountres.com/investor-relations/financial-reports#2020.

This press release refers to sales volumes of "liquids", "natural gas", "condensate and oil" and "other NGLs".    "Liquids" means NGLs (including condensate) and oil combined, "natural gas" refers to conventional natural gas and shale gas combined, "condensate and oil" refers to condensate, light and medium crude oil and tight oil combined and "other NGLs" refers to ethane, propane and butane.  Below is a complete breakdown of sales volumes for applicable periods by specific product type of shale gas, conventional natural gas, NGLs, tight oil and light and medium crude oil.  Numbers may not add due to rounding.

The foregoing list of risks is not exhaustive. For more information relating to risks, see the sections titled "Risk Factors" in Paramount's annual information form for the year ended December 31, 2020, which is available on SEDAR at www.sedar.com.  The forward-looking information contained in this press release is made as of the date hereof and, except as required by applicable securities law, Paramount undertakes no obligation to update publicly or revise any forward-looking statements or information, whether as a result of new information, future events or otherwise.

In this press release, "Adjusted funds flow", "Netback", "Free cash flow", "Net Debt" and "Total Capital Expenditure", together the "Non-GAAP financial measures", are used and do not have any standardized meanings as prescribed by International Financial Reporting Standards. Certain comparative figures have been reclassified to conform to the current years' presentation.


"Free cash flow" refers to adjusted funds flow less total capital expenditures and asset retirement obligation settlements.  Free cash flow is used by management and investors to assess the amount of internally generated cash available to repay debt, reinvest in the business or return to shareholders. The following is the calculation of free cash flow from the nearest GAAP measure for the three months ended December 31, 2020:

"Reserves replacement ratio" is calculated by dividing: (i) the net changes in reserves from the prior year from extensions/improved recovery, technical revisions and economic factors, by (ii) the aggregate production during the year.  Reserves replacement ratio is a measure commonly used by management and investors to assess the rate at which reserves depleted by production are being replaced by reserves added through operations.

"Finding and development costs" are calculated by dividing: (i) total capital expenditures for the period (excluding corporate expenditures and land and property acquisitions) by (ii) the net changes in reserves from the prior year from extensions/improved recovery, technical revisions and economic factors. Finding and development costs are a measure commonly used by management and investors to assess the relationship between capital invested in oil and gas exploration and development projects and reserve additions associated with such projects.