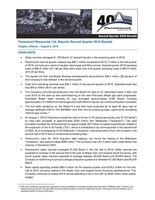 In response to seasonally weak natural gas prices, the Company temporarily shut-in approximately 600 Boe/d of dry gas production in the Kaybob Region in June 2019. Paramount permanently shut-in its Hawkeye property in late-2018 and its Zama property in the first half of 2019 due to challenging economics. In total, the Company has shut-in approximately 2,100 Boe/d of uneconomic production since the fourth quarter of 2018 as it focuses on operating profitably and reducing operating costs.

Base capital spending totaled $86.0 million in the second quarter of 2019, primarily related to drilling and completion programs at Wapiti and Karr in the Grande Prairie Region and at South Duvernay in the Kaybob Region. The Company also incurred $11.0 million of capital spending in the second quarter related to the D2 expansion project at the 6-18 Facility, which was reimbursed on closing of the Midstream Transaction. Second quarter 2019 field activities also included $2.0 million of asset retirement obligation settlements. Paramount plans to increase production, including a higher proportion of liquids, in the second half of the year as new liquids-rich Montney and Duvernay wells from the 2019 capital program are brought-on production.

Second quarter 2019 sales volumes at Karr averaged 21,782 Boe/d compared to 24,786 Boe/d in the first quarter of 2019. The decrease in the netback at Karr in the second quarter was primarily caused by lower natural gas prices and lower production.

Production levels at Karr in the second quarter were impacted by natural declines and the temporary shut-in of certain wells due to offsetting completion activities at the 4-24 pad and drilling operations at the 1-19 pad. The Company scheduled completion operations for the 5 (5.0 net) Montney wells on the 4-24 pad after spring breakup to capture cost savings from operating in warmer conditions. The 4-24 pad is scheduled to start-up in the third quarter.

Paramount is drilling 3 (3.0 net) new Montney wells on the 1-19 pad, which are scheduled to be completed in the third quarter and onstream in the fourth quarter of 2019.  Karr area sales volumes are expected to increase through the second half of the year as new production is added from these two new pads. Production levels in July were impacted by a previously scheduled 10-day turnaround at the 6-18 Facility.

The Company drilled its initial Lower Montney well (the 00/4-25 well in the table below) in 2018 and two additional wells in the current year development program are also targeting the Lower Montney. The 4-24 and 1-19 pads each include one Lower Montney well, and these wells are scheduled to be brought-on production in the third and fourth quarters, respectively. To date, no Lower Montney locations have been included in the reserves recognized for Karr. The results of these three wells will be incorporated in Paramount's reserves evaluations at the end of the year and will be used to determine the Company's inventory of potential Lower Montney drilling locations.

Sales volumes at Wapiti averaged 3,903 Boe/d in the second quarter of 2019, including 5.5 MMcf/d of natural gas and 2,982 Bbl/d of liquids, and generated a netback of $9.2 million ($25.94 per Boe). Paramount began flowing test volumes from up to nine of the 11 (11.0 net) new wells on the 9-3 pad in May 2019 as part of the commissioning program at the new third-party Wapiti natural gas processing plant (the ʺWapiti Plantʺ). The start-up of the two remaining wells were intentionally delayed due to completion activities at Paramount's offsetting 5-3 pad. Production was intermittent as the commissioning program progressed, and fuel gas and shrink losses were higher through the start-up period. Shrink losses are expected to diminish as operations at the Wapiti Plant continue to stabilize and throughput increases.

Estimated sales volumes at Wapiti in July averaged approximately 6,300 Boe/d, including approximately 10.5 MMcf/d of natural gas and 4,500 Bbl/d of liquids, as production from the 9-3 pad increased due to higher runtime at the Wapiti Plant. Wells at Wapiti continue to be produced at restricted rates.

The wells on the 9-3 pad are the Company's first Wapiti wells fracked with the same completion design as utilized at Karr. This 11-well pad consists of a six-well block drilled to the south and a five-well block drilled to the north. The north and south blocks are specifically designed to test landing zone and spacing patterns. Initial well results have indicated significantly higher CGR's than third-party offsetting wells which were completed with a different completion design. The five wells started-up on the Wapiti 9-3 pad that have produced for at least 60 days had an average wellhead CGR of 376 Bbl/MMcf over their first 60 producing days.(1)

Second quarter 2019 capital spending at Wapiti was $21.3 million, focused on completion operations for 12 (12.0 net) wells on the new 5-3 pad, which were drilled in the first quarter of 2019. All 12 wells are scheduled to be completed by the end of the third quarter. This pad is scheduled to be equipped and brought-on production in the fourth quarter.

At Kaybob South Duvernay, 5 (2.5 net) new wells on the 2-28 pad were drilled between September 2018 and January 2019 and completed in the spring of 2019. These wells were tied-in and brought-on production in late-June 2019. These five wells averaged 1,104 Boe/d of production per well over their first 30 days of production, with an average wellhead CGR of 179 Bbl/MMcf.(2)

In November 2018, the Company brought 4 (4.0 net) new wells on production on the 10-35 pad at Kaybob Smoky Duvernay through Paramount's Smoky 06-16 gas plant. The Company is continuing to monitor the performance of these wells and optimize processes at the 06-16 plant as a full field development strategy is evaluated for this play. These wells have exceeded previous type curve estimates for this play in this area. The following table summarizes the performance of the four wells on the 10-35 pad:

At the Zama property in northern Alberta, the Company took advantage of dry weather conditions and completed the full shut-down of area production by the end of June 2019, three months ahead of schedule. The closure program will continue through the balance of the year to permanently abandon over 1,000 kilometers of pipelines and suspend all facilities. The closure of Zama is anticipated to cost $13.4 million and will result in a material reduction in the Company's future operating expenses.

Paramount has recently completed a project in the Kaybob and Central Alberta and Other Regions, under budget and ahead of schedule, which included the replacement of approximately 1,700 high-bleed controllers with modern low-bleed units at a total cost of $3.0 million. These low-bleed controllers are expected to eliminate approximately 120,000 tonnes of GHG emissions annually. The project is anticipated to generate approximately $9.0 million in GHG credits through 2022.

As a result of a reduction in Alberta income tax rates enacted in the second quarter of 2019, the carrying value of the Company's deferred tax asset was reduced by approximately $106 million with a corresponding charge to deferred tax expense.

The foregoing list of risks is not exhaustive. For more information relating to risks, see the section titled "Risk Factors" in Paramount's annual information form for the year ended December 31, 2018, which is available on SEDAR at www.sedar.com. The forward-looking information contained in this press release is made as of the date hereof and, except as required by applicable securities law, Paramount undertakes no obligation to update publicly or revise any forward-looking statements or information, whether as a result of new information, future events or otherwise.

This press release contains metrics commonly used in the oil and natural gas industry. Each of these metrics is determined by the Company as set out below or elsewhere in this press release. "CGR" means condensate to gas ratio and is calculated by dividing raw Wellhead Liquids volumes by raw wellhead natural gas volumes. ʺWellhead Liquidsʺ means oil, condensate and other hydrocarbon liquids. CGR does not have a standardized meaning and may not be comparable to similar measures presented by other companies. As such, it should not be used to make comparisons. Management uses oil and gas metrics for its own performance measurements and to provide shareholders with measures to compare the Company's performance over time; however, such measures are not reliable indicators of the Company's future performance and future performance may not compare to the performance in previous periods and therefore should not be unduly relied upon.