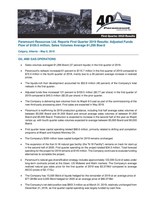 First quarter 2019 sales volumes at the Karr development averaged 24,786 Boe/d compared to 26,282 Boe/d in the fourth quarter of 2018. First quarter production was impacted by an unplanned outage at a downstream third-party processing facility in February and the effects of severe cold weather. The 6-18 Facility achieved an overall runtime rate of 98 percent in the first quarter, excluding the duration of the unplanned third-party outage. The decrease in operating expenses in the first quarter was primarily due to lower processing fees and reduced water disposal costs. A higher-rate water injection system was installed at the 6-18 Facility in February, which increased water injection capacity and reduced water hauling and disposal costs.

Royalty rates for the Karr development increased in the first quarter of 2019 compared to the fourth quarter of 2018, as a number of wells had fully utilized new well royalty incentives. New wells at Karr will continue to benefit from a five percent initial royalty rate up to the maximum incentive.

Development activities at Karr will resume in the second quarter of 2019 with the completion of five Montney wells drilled in 2018 on the 4-24 pad. The Company scheduled completion operations after spring breakup to capture cost savings resulting from operating in warmer conditions. Paramount also plans to commence drilling three new wells on the 1-19 pad. These eight new Montney wells will be brought-on production as required to offset natural production declines.

The expansion of the 6-18 Facility remains on track for start-up in the second half of 2020. First quarter 2019 capital spending on the project totaled $34.5 million, primarily related to long-lead time equipment purchases.

The Company drilled its initial lower Montney well on the 1-2 pad in 2018. Two additional wells in the 2019 development program will also target the lower Montney. To date, no lower Montney locations have been included in the reserves recognized for Karr. The results of these three wells will be incorporated in Paramount's reserves evaluations in the future and will be used to determine the Company's inventory of potential lower Montney drilling locations.

Paramount's new Wapiti resource play is a continuation of the Montney trend that the Company has been successful in developing approximately 25 kilometers to the southeast at Karr. First quarter 2019 capital spending at Wapiti was $32.1 million, focused on the tie-in of 11 (11.0 net) wells on the 9-3 pad and the drilling of 12 (12.0 net) wells on the 5-3 pad.

The Company is delivering test volumes from the 9-3 pad as part of the commissioning of the new third-party Wapiti natural gas processing plant (the ʺWapiti Plantʺ) and first sales are expected in May 2019. Production is expected to increase as throughput at the Wapiti Plant ramps up, with all 11 wells on the 9-3 pad scheduled to be brought-on production in 2019. Drilling operations were completed for 12 wells on the 5-3 pad in the first quarter of 2019, and these wells are scheduled to be completed in the second quarter. Paramount has firm-service third-party natural gas transportation capacity for its Wapiti production volumes, which increases from 50 MMcf/d in 2019 to 130 MMcf/d in 2021.

The Company continues to pursue innovative alternatives to further reduce costs in its drilling and completion programs, including optimizing drilling and completion designs, streamlining logistics and realizing the benefits of economies of scale by utilizing large multi-well pads. As a result of these cost reduction initiatives, total capital costs for the 9-3 pad were reduced by approximately 11 percent compared to the original budget for the project.

As the Company integrated learnings from the 9-3 pad, drilling improvements were achieved on the 5-3 pad. Drilling time decreased in the lateral sections by approximately 25 percent compared with the 9-3 pad. In addition, the wellbores were drilled within the five-meter target zone for 94 percent of the lateral section compared to 83 percent observed for the wells on the 9-3 pad.

At South Duvernay, 5 (2.5 net) new wells on the 2-28 pad were drilled in 2018 and completed in March and April 2019. These wells are expected to be tied-in and brought-on production in the third quarter of 2019. Paramount set new records for these wells, reducing drilling time for the lateral sections by 47 percent compared to the 7-22 pad drilled in 2018. The wellbores for the 2-28 pad were also drilled within the five-meter target zone for 91 percent of the lateral sections compared to 82 percent observed for the wells on the 7-22 pad.

In November 2018, the Company brought 4 (4.0 net) new wells on production on the 10-35 pad at Smoky Duvernay through Paramount's Smoky 06-16 plant. Cumulative production for these four wells as of May 3, 2019 totaled 674 MBoe, including 437 MBbl of wellhead liquids (average CGR of 310 Bbl/MMcf).(1) Production from the 10-35 pad has been facility constrained at the 06-16 plant and Paramount is currently completing debottlenecking enhancements to provide incremental capacity.

The Company's Kaybob Region drilling program in the first quarter of 2019 also included a tenure well in the North Kaybob Duvernay oil window and an initial appraisal well at the Ante Creek Montney property.

The Company has commenced the closure program at Zama in northern Alberta, with approximately 25 percent of wells shut-in to date. The program will continue through the balance of the year as conditions permit.

In January 2019, Paramount implemented a normal course issuer bid program under which the Company may purchase up to 7.1 million Paramount common shares for cancellation. No purchases have been made under the program to date.

Paramount's first quarter 2019 results, including Management's Discussion and Analysis and the Company's Consolidated Financial Statements can be obtained at https://mma.prnewswire.com/media/883733/PRL_Q1_2019_Results.pdf.

This press release contains metrics commonly used in the oil and natural gas industry. Each of these metrics is determined by the Company as set out below or elsewhere in this press release. "CGR" means condensate to gas ratio and is calculated by dividing wellhead raw liquids volumes by wellhead raw natural gas volumes.  CGR does not have a standardized meaning and may not be comparable to similar measures presented by other companies. As such, it should not be used to make comparisons. Management uses oil and gas metrics for its own performance measurements and to provide shareholders with measures to compare the Company's performance over time; however, such measures are not reliable indicators of the Company's future performance and future performance may not compare to the performance in previous periods and therefore should not be unduly relied upon.