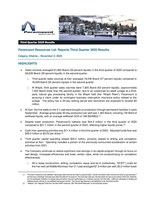 Paramount expects to finalize its 2021 capital budget and related guidance in the first quarter of 2021.  Based on preliminary planning and current market conditions, Paramount anticipates 2021 capital spending, excluding land acquisitions and abandonment and reclamation activities, to range between $225 million and $275 million.  A capital program in this range would be expected to result in:

Grande Prairie Region sales volumes and netbacks are summarized below:

Third quarter sales volumes at Karr averaged 19,246 Boe/d (57 percent liquids) compared to 16,009 Boe/d (52 percent liquids) in the second quarter. Sales volumes were higher primarily due to production contributions from the 12-18 pad that first flowed through test facilities in the second quarter and was subsequently brought onstream through permanent facilities in early July, as well as the 2-1 pad that was brought onstream through permanent facilities in early September. Sales volumes also benefited from a pipeline debottlenecking project designed to mitigate current and potential future back-out issues as new pads are brought on production. The project included the installation of booster pumps servicing the southwest extents of the Karr gathering system and has resulted in improved runtime of both legacy and new wells in the area.

Per unit operating costs continue to trend lower as a result of increasing volumes combined with the impact of two water disposal wells that were brought into service at the end of the first quarter. The Company continues to expect these wells to meet Karr area development needs as production ramps up. Per unit operating and transportation costs are expected to decline as the Company ramps up production in the fourth quarter of 2020 and into 2021.

The five-wells on the 2-1 pad averaged gross peak 30-day production per well of 1,463 Boe/d, including 735 Bbl/d of wellhead liquids, and an average wellhead CGR of 168 Bbl/MMcf.(1) These wells exhibit higher gas production compared to other recently drilled Karr wells, which is in line with expectations.

In 2020, Paramount implemented data analytics workflows that incorporate and leverage proprietary geoscience characterization and daily well performance with public data sources. Utilizing this data foundation, Paramount is able to generate advanced predictive models to rapidly assess development opportunities at its Grande Prairie Montney assets under a variety of scenarios and implement changes to completion design, well spacing and other factors to maximize returns.  Improved completion design is one of the primary reasons that costs in the Karr area have been trending downward while completion effectiveness has been maintained. All-in DCET costs at the 2-1 pad averaged $7.3 million per well, representing a 39 percent reduction compared with average DCET costs for Karr wells in 2018 and 2019.

At the five-well 5-16 West pad, completion activities were recently concluded and preliminary lease construction, drilling and completion costs are coming in at an estimated $7.2 million per well. The pre-building and modularization of above ground well equipment packages on this pad improved schedule efficiency, and the Company anticipates bringing these wells on production in late November.

Paramount recently commenced drilling six Middle Montney wells on the Karr 3-10 pad. The Company plans to complete, tie-in and bring on production all six of these wells in the first half of 2021. Additionally, lease construction at the five-well 7-18 pad has begun, with drilling anticipated to start in December 2020.

Third quarter sales volumes at Wapiti averaged 7,925 Boe/d (63 percent liquids) compared to 14,940 Boe/d (64 percent liquids) in the second quarter.  Production was shut-in due to a six-week unplanned outage at the Wapiti Plant.  Paramount is pursuing a claim under its contingent business interruption insurance policy related to the outage.  The policy has a 30-day waiting period and recoveries are expected to exceed $5 million.

Completion operations at the five-well 5-3 West pad commenced in October, and despite utilizing higher fluid and proppant intensity compared to the 5-3 East pad drilled in 2019, the Company estimates per well completion costs to come in approximately 30 percent lower as a result of improved efficiencies and completion design.  Preliminary lease construction, drilling and completion costs are estimated at $7.3 million per well.  Paramount plans to equip, tie-in and bring on production these five wells in the coming months.

Drilling of the remaining six wells on the eight-well (four Middle Montney and four Lower Montney) Wapiti 6-4 pad is scheduled to commence late in the fourth quarter.  The Company plans to complete, tie-in and bring on production all eight wells in mid-2021.

The following table summarizes the performance of Wapiti wells on the 5-3 East and 9-3 pads:

Kaybob Region sales volumes averaged 25,477 Boe/d (26 percent liquids) in the third quarter compared to 29,561 Boe/d (26 percent liquids) in the second quarter.  The quarter over quarter decrease was primarily attributable to natural declines and planned maintenance outages during the third quarter.  The Company completed a major turnaround in the quarter of its Presley 3-29 facility on schedule, under budget and without incident.

Paramount holds material positions in the Duvernay and Montney resource plays in the Kaybob Region that will compete for capital in the medium term. The Company is monitoring regional competitor activity and using this information to evaluate the full field development plans for these plays.  Recent competitor results have been encouraging, including an offsetting well just north-east of the Company's Kaybob North Duvernay field that appears to have produced the highest ever monthly oil/condensate volume for a Duvernay well in the basin.

Supporting production in the Region is a network of owned infrastructure including the Company's crude oil terminal that was first put into service in the fourth quarter of 2019.  The pipeline connected terminal provides Paramount the opportunity to increase netbacks for its Kaybob area crude and condensate volumes and capture incremental value in price differentials.

As part of Paramount's continued commitment to responsible energy development, the Company has been participating in GHG emission reduction programs and investing in new equipment to reduce GHG emissions from its operations.  Upstream emissions intensity (combined Scope 1 and Scope 2) was 18.5 kg CO2e/Boe in 2019, an 18 percent reduction from the previous year.  This compares to the Oil and Gas Climate Initiative ("OGCI") group average of 21.1 kg CO2e/Boe in 2019 and their stated target of 20.0 kg CO2e/Boe by the year 2025.  OGCI is an international industry-led organization comprised of 12 of the world's largest energy companies, representing over one fifth of global oil and gas production.

The Company's commodity hedging position as at September 30, 2020 is summarized below:

The foregoing list of risks is not exhaustive. For more information relating to risks, see the sections titled "Risk Factors" in Paramount's annual information form for the year ended December 31, 2019 and in the MD&A, which are available on SEDAR at www.sedar.com.  The forward-looking information contained in this press release is made as of the date hereof and, except as required by applicable securities law, Paramount undertakes no obligation to update publicly or revise any forward-looking statements or information, whether as a result of new information, future events or otherwise.

This press release refers to "CGR", a metric commonly used in the oil and natural gas industry. "CGR" means condensate to gas ratio and is calculated by dividing wellhead raw liquids volumes by wellhead raw natural gas volumes.  This metric does not have a standardized meaning and may not be comparable to similar measures presented by other companies. As such, it should not be used to make comparisons. Management uses this oil and gas metric for its own performance measurements and to provide shareholders with measures to compare the Company's performance over time; however, such measure is not a reliable indicator of the Company's future performance and future performance may not compare to the performance in previous periods and therefore should not be unduly relied upon.