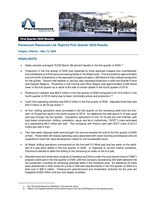 First quarter 2020 sales volumes at Karr averaged 20,885 Boe/d compared to 24,943 Boe/d in the fourth quarter of 2019. First quarter sales volumes were impacted by severe cold weather and the back-out of production from certain legacy wells due to high pressures from the 4-24 and 1-19 pads.

The Company has installed gas lift and related compression at pads near the southwest terminus of Paramount's gathering system. This work was done to mitigate the impact from newer higher-pressure wells upstream. Work is ongoing to mitigate current and future potential back-out issues in the Karr gathering system, as new production continues to be brought online. The bulk of these efforts are scheduled to be completed in third quarter of 2020.

Paramount brought into service two additional water disposal wells towards the end of the first quarter of 2020. These new wells are anticipated to reduce operating costs in the second quarter of 2020 and beyond by reducing the need to truck and dispose of water at third-party facilities.  Trucking is expected to be reduced even further upon the start-up of the third-party Karr 6-18 expansion in the second half of 2020 as additional high-pressure pumps will facilitate increased transportation of water to the disposal wells. The Company estimates that with the addition of these wells and related infrastructure, water disposal capacity is now sufficient to meet development needs for the foreseeable future.

Drilling operations on 5 (5.0 net) wells on the 12-18 pad that commenced in the fourth quarter of 2019 were completed in the first quarter of 2020. New drill bit technology and improved directional drilling performance resulted in an 18 percent decrease in per meter costs on an Upper Montney well relative to equivalent wells on prior pads. Likewise, the Company saw improved efficiencies in its completion operations with a 25 percent increase in peak fracking stages per day at the 12-18 pad.  Paramount continues to incorporate cost savings through design changes that maintain performance without compromising on completion effectiveness.

The streamlining of pad facility design combined with improved execution and strategic alliances with key vendors has proven effective in reducing equipping and tie-in costs. The Company anticipates savings of approximately 10 percent on upcoming pads with the potential for further reductions based on recent discussions with its key vendors. In aggregate, Paramount estimates that the all-in DCET cost on the 12-18 pad will average approximately $9.5 million per well; a new pacesetter cost for the Company. This compares with historic type well DCET costs of $12.3 million per well in Karr.

The Company plans to complete and bring on production all 10 (10.0 net) wells from the 2-1 pad, drilled in the fourth quarter of 2019, and the 12-18 pad over the remainder of the year in conjunction with the completion of the third-party Karr 6-18 processing facility expansion, expected in the second half of 2020. Paramount commenced the drilling of 5 (5.0 net) Montney wells on the 5-16 pad in the first quarter of 2020 with current plans to complete and bring the wells on production in 2021.

Production in the second and third quarters of 2020 will be impacted by the temporary shut-in of certain offsetting wells due to completion activities at both the 12-18 and 2-1 pads. As these wells resume production and wells on the 12-18 and 2-1 pads are brought onstream, production at Karr is expected to increase through the second half of the year. A scheduled one-week outage in May at the third-party operated Karr 6-18 facility, in relation to expansion activities, is currently underway and will also impact second quarter volumes.

First quarter sales volumes at Wapiti averaged 7,209 Boe/d (66 percent liquids) compared to 11,498 Boe/d (66 percent liquids) in the fourth quarter of 2019. Production in the first quarter of 2020 was impacted by three outages at the third-party processing facility consisting of an unplanned outage in January of approximately 12 days (1,500 Boe/d), a planned outage in early March of approximately 7 days (1,100 Boe/d) and an unplanned outage in the second half of March of approximately 11 days (1,700 Boe/d). During the outages, both Paramount and the third-party operator capitalized on the downtime by conducting optimization and maintenance work that would have otherwise required future near-term outages. While it is expected that these activities will improve the reliability and efficiency of the processing facility and associated infrastructure, Paramount continues to assume a lower uptime factor until consistent reliability is exhibited.

The Company commenced drilling operations on 5 (5.0 net) wells at the 5-3 West pad and completed the drilling of 2 (2.0 net) new Montney wells at the 6-4 pad in the first quarter of 2020. Plans to complete and bring onstream wells on the 5-3 West pad, drill the remaining 6 (6.0 net) wells on the 6-4 pad, and complete and bring onstream all 8 wells, have been deferred. A tenure well drilled and completed in 2015 is planned to be brought on production later in 2020.

The following table summarizes the performance of wells on the 9-3 and 5-3 East pads:

In the first quarter of 2020 the Company drilled 1 (1.0 net) Montney oil well at Ante Creek for Crown land retention purposes. A second land retention well that was planned to be drilled in 2020 prior to the Government of Alberta's announcement extending land expiries by one year will be deferred in reliance on this extension. The Company will benefit from this extension in a number of other areas.

The Company's crude oil terminal adjacent to the Kaybob North 8-9 gas plant continues to ramp-up operations smoothly with the capacity to handle growing Paramount and third-party volumes. Along with significant crude storage capability at this facility, Paramount is well positioned to take advantage of recent and anticipated price volatility in the crude and condensate markets in order to enhance Kaybob Region netbacks.

The Company continued its ABC abandonment and reclamation projects at Hawkeye and Zama in 2020. In the first quarter of 2020, Paramount abandoned 224 wells in these areas (out of total of 248 abandoned by the Company in the quarter), including all remaining operated Hawkeye wells. In doing so, the Company realized an approximate 7 percent decrease in per-well abandonment costs compared to the fourth quarter of 2019.

As part of Paramount's continued commitment to responsible energy development, the Company has been participating in greenhouse gas ("GHG") emission reduction programs and investing in new equipment to reduce GHG emissions from its operations.

The Company is continuing upgrades to replace its remaining high-bleed controllers at various sites with modern low-bleed units. 196 low-bleed units are expected to be installed in the Grande Prairie Region in the second quarter of 2020. These new units are expected to eliminate approximately 8,600 tonnes of GHG emissions per year and generate approximately $0.5 million in GHG credits under current regulations through 2022.

The Company's current commodity hedge position is summarized below:

Paramount's first quarter 2020 results, including Management's Discussion and Analysis and the Company's Consolidated Financial Statements can be obtained at https://mma.prnewswire.com/media/1167577/Paramount_Resources_Ltd_ReportsQ12020.pdf

The foregoing list of risks is not exhaustive. For more information relating to risks, see the sections titled "Risk Factors" in Paramount's annual information form for the year ended December 31, 2019, and in the MD&A which are available on SEDAR at www.sedar.com. The forward-looking information contained in this press release is made as of the date hereof and, except as required by applicable securities law, Paramount undertakes no obligation to update publicly or revise any forward-looking statements or information, whether as a result of new information, future events or otherwise.

"Netback" equals petroleum and natural gas sales less royalties, operating costs and transportation and NGLs processing costs.  Netback is commonly used by management and investors to compare the results of the Company's oil and gas operations between periods. Refer to the table under the heading "Financial and Operating Results" for the calculation thereof.

This press release refers to "CGR", a metric commonly used in the oil and natural gas industry. "CGR" means condensate to gas ratio and is calculated by dividing wellhead raw liquids volumes by wellhead raw natural gas volumes. This metric does not have a standardized meaning and may not be comparable to similar measures presented by other companies. As such, it should not be used to make comparisons. Management uses this oil and gas metric for its own performance measurements and to provide shareholders with measures to compare the Company's performance over time; however, such measure is not a reliable indicator of the Company's future performance and future performance may not compare to the performance in previous periods and therefore should not be unduly relied upon.