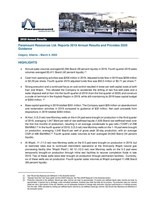 FINANCIAL AND OPERATING RESULTS (1)
($ millions, except as noted)

The Board of Directors of Paramount is pleased to announce the appointment of Paul Kinvig to the role of Chief Financial Officer. Paul has most recently served as Paramount's Vice President Finance, Capital Markets and has held roles of increasing responsibility in Paramount's finance area throughout his 15 years with the Company. Bernie Lee will continue to serve as Executive Vice President, Finance of the Company.  The Board recognizes and appreciates the significant contributions that Bernie Lee has made as Chief Financial Officer to Paramount's success over the last 17 years and looks forward to his continuing contributions.

The foregoing list of risks is not exhaustive. For more information relating to risks, see the section titled "Risk Factors" in Paramount's annual information form for the year ended December 31, 2019, which is available on SEDAR at www.sedar.com.  The forward-looking information contained in this press release is made as of the date hereof and, except as required by applicable securities law, Paramount undertakes no obligation to update publicly or revise any forward-looking statements or information, whether as a result of new information, future events or otherwise.

In this press release, "Adjusted funds flow", "Base capital", "Netback" and "Net Debt", together the "Non-GAAP measures", are used and do not have any standardized meanings as prescribed by International Financial Reporting Standards.

"Base capital" consists of the Company's spending on wells, infrastructure projects, other property, plant and equipment and exploration and evaluation assets and excludes spending related to the expansion of the Karr 6-18 facility prior to its sale and land and property acquisitions. The base capital measure provides management and investors with information regarding the Company's capital spending on wells and infrastructure projects separate from land and property acquisition activity.  The following is a reconciliation of base capital from the nearest GAAP measure for the years ended December 31, 2019 and December 31, 2018:

"Netback" equals petroleum and natural gas sales less royalties, operating costs and transportation and NGLs processing costs.  Netback is commonly used by management and investors to compare the results of the Company's oil and gas operations between periods. Refer to the table under the heading "Financial and Operating Results" for the calculation thereof.