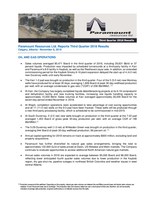 Paramount's sales volumes averaged 80,471 Boe/d in the third quarter of 2018, including 29,831 Bbl/d or 37 percent liquids. Production was impacted by scheduled turnarounds at a third-party facility in Karr and Paramount's 8-9 natural gas processing facility in Kaybob (the ʺ8-9 Plantʺ), which in total impacted sales volumes by approximately 5,000 Boe/d, as well as the sale of approximately 5,000 Boe/d of production at Resthaven/Jayar in early-July. In addition, an extended commissioning period for the Kaybob Smoky 6-16 processing plant expansion (the ʺ6-16 Plantʺ) delayed the start-up of new Duvernay wells from August to early-November.

Fourth quarter 2018 sales volumes are expected to be lower than previously forecast primarily as a result of lower production in the Kaybob Region. Montney Oil production levels are lower due to bringing on new production later than planned, reducing the number of wells drilled in 2018 in order to redeploy capital to fund additional well completions at Wapiti and increased water handling requirements for certain wells. At Smoky Duvernay, new production was delayed until early-November as a result of unanticipated issues identified while commissioning the 6-16 Plant. At South Duvernay, production levels are being impacted by start-up issues related to new production equipment and unscheduled third-party facility outages.

The Company continues to monitor its natural gas properties and is shutting-in wells on a temporary basis when market prices fall below economic thresholds. In September, Paramount permanently shut-in all production related to the Hawkeye area in the Central Alberta and Other region, which averaged approximately 1.79 MMcfe/d of dry gas (approximately 300 Boe/d) for the nine months ended September 30, 2018.

Exploration and development capital was $131.0 million in the third quarter of 2018 and $434.4 million for the nine months ended September 30, 2018. Year-to-date exploration and development spending included $124.8 million related to growth projects at Wapiti and Karr that will add material liquids-rich production and cash flow in 2019. The Company completed an extensive maintenance program in the third quarter in the Kaybob and Central Alberta and Other regions, including processing facility turnarounds, compressor overhauls and equipment upgrades. Where possible, this work was scheduled to align with facility outages.

Grande Prairie Region sales volumes averaged 21,446 Boe/d in the third quarter of 2018, primarily liquids-rich production from the Karr development. The impact of the scheduled turnaround at a third-party facility that processes Karr natural gas production was as expected. Exploration and development capital totaled $80.6 million in the third quarter and $228.4 million for the nine months ended September 30, 2018. Development activities in the third quarter focused on starting up the five wells on the 1-2 Karr pad and drilling and completion operations at the 9-3 Wapiti pad.

Royalty rates for the Karr development increased in the third quarter of 2018 compared to the same period in 2017 as a number of wells from the 2016/2017 Montney drilling program fully utilized their new well royalty incentives. New wells at Karr will continue to benefit from a five percent initial royalty rate up to the maximum incentive.

Initial results from the five Montney wells on the 1-2 Karr pad have been in line with expectations. The 1-2 Karr pad includes the Company's first high intensity completion of a Lower Montney horizontal well. This well continues to meet expectations and is performing in line with adjacent Middle Montney wells. No well locations have been recognized in the Lower Montney for Paramount's Karr development to date.

The following table summarizes the performance of the 2016/2017 and 2018 Karr wells that have produced for at least 30 days:

In August 2018, six of the eleven wells on the Wapiti 9-3 pad were completed. To take advantage of economies of scale and reduced completion fluid handling costs due to warmer weather, the Company accelerated completions for the remaining five wells on the 9-3 pad to October 2018. The completion program for these wells set new pacesetters on several metrics and was completed without any operational or safety issues. The fracks employed a plug and perf design in a zipper fracturing operation, with pumping downtime being minimized between stages by utilizing a surface manifold. This, along with other advances in well designs and program execution, contributed to an average of 14 stages pumped per day (an increase from 11 previously), with a day record of 23 stages pumped (compared to 16 previously), both of which are new records for Paramount. A transfer of new technology from the Karr field has also reduced the duration of mill-out operations with the adoption of dissolvable plugs.

The Company has also commenced drilling operations for 12 (12.0 net) new Montney wells on the 5-3 pad at Wapiti. Wells from the 9-3 pad and the 5-3 pad will be produced through a new 150 MMcf/d third-party processing facility, which the operator plans to commission in mid-2019.

Kaybob Region sales volumes averaged 37,454 Boe/d in the third quarter of 2018, including 11,632 Bbl/d of liquids. The production impact of the scheduled turnaround at Paramount's 8-9 Plant in Kaybob was larger than expected. Exploration and development capital in the Kaybob Region was $33.6 million in the third quarter of 2018 and $172.5 million for the nine months ended September 30, 2018.

The 4 (4.0 net) wells on the 10-35 Smoky pad began flowing through permanent facilities in early-November. The 6-16 Plant at Smoky was expanded from 6 MMcf/d to 12 MMcf/d by making use of existing equipment moved to Kaybob from Zama in northern Alberta. This redeployment of existing equipment reduced capital costs and enabled the plant expansion to be fast tracked from 2019, but also resulted in an unanticipated two-month extension of the commissioning and startup period as plant components underwent additional inspections and refurbishment.

Initial results have confirmed the high liquids yield nature of the Smoky Duvernay reservoir. The Company plans to evaluate the performance of these wells for the remainder of 2018 and develop a full field development strategy for the Company's Duvernay lands in this area.

The Company's 2018 capital program at the Kaybob South Duvernay development includes two multi-well pads. 5 (2.5 net) wells on the 7-22 South Duvernay pad were brought on production in the third quarter. These wells averaged 1,453 Boe/d of gross peak 30-day production per well, with an average CGR of 199 Bbl/MMcf.(1) Drilling operations for 5 (2.5 net) wells on the 2-28 pad commenced in September. These wells are scheduled to be completed and brought on production in mid-2019.

Paramount is utilizing fiber optic technology to monitor production data from controlled tests in perforation clusters, fluid viscosity, pump rate, fracture sequencing and landing zones on two of the wells on the 7-22 pad. The system was installed prior to fracking the wells and has remained intact for production testing. The information gathered in these tests is being incorporated in future well completions.

Third quarter 2018 sales volumes at the Kaybob Montney Oil property were 7,052 Boe/d, approximately 57 percent liquids. Production levels in the third quarter were significantly impacted by the turnaround at the 8-9 Plant. Montney Oil production is lower than planned due to bringing on new production later than scheduled, reducing the number of wells drilled in 2018 and increased water handling requirements for certain wells. To date, 8 (8.0 net) new wells have been completed and brought on production. Drilling operations for 3 (3.0 net) additional wells were completed in the third quarter and these wells are expected to be on-stream by the end of the year. Two (2.0 net) additional wells are being drilled on the property in the fourth quarter of 2018.

Development activities in the Central and Other Region are focused at Willesden Green, where the 5-29 Duvernay oil well was completed and brought on production in the third quarter. Pressure test results from the 5-29 well confirm that an over-pressure, high oil deliverability reservoir is present on the majority of the Company's Willesden Green Duvernay acreage. The 5-29 well averaged 944 Boe/d of peak 30-day wellhead production, 86 percent oil.(2)

Over the course of the past year, the Company has expanded its Duvernay land position in the East Shale Basin. Total working interest lands more than doubled to approximately 50,000 acres. Paramount also owns over 10,000 acres of Fee Title lands in the area.

Paramount's third quarter 2018 results, including Management's Discussion and Analysis and the Company's Consolidated Financial Statements can be obtained at:
http://files.newswire.ca/1509/PRL_Q3_2018_Results.pdf

The foregoing list of risks is not exhaustive. For more information relating to risks, see the section titled "RISK FACTORS" in Paramount's current annual information form. The forward-looking information contained in this press release is made as of the date hereof and, except as required by applicable securities law, Paramount undertakes no obligation to update publicly or revise any forward-looking statements or information, whether as a result of new information, future events or otherwise.