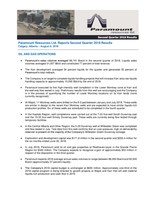 Operating costs averaged $12.01 per Boe in the second quarter of 2018 and $11.56 per Boe for the six months ended June 30, 2018. As a large proportion of Paramount's operating costs are fixed, operating costs per Boe are expected to decrease in the second half of 2018 as sales volumes increase and further benefits are realized from operational efficiencies. The Company is continuing to streamline its field operations, including consolidating field offices, optimizing field staff and contract operators and rationalizing software and service contracts.

In the second quarter of 2018, completion operations were carried out on three multi-well pads at Kaybob and Karr and a Duvernay well was completed at Willesden Green. Paramount successfully completed 5 (2.5 net) wells on the 7-22 Kaybob South Duvernay pad and 5 (5.0 net) wells on the 1-2 Karr Montney pad. Both pads set new pacesetters on several metrics and were completed without any operational or safety issues. The completions employed a plug and perf design with a zipper fracturing operation. Pumping downtime was minimized between stages by utilizing a surface manifold on both pads. This, along with other improvements, contributed to an average of 11.4 and 10.9 fracks completed per day, with a daily maximum of 15 and 16 fracks, for the 7-22 Kaybob pad and the 1-2 Karr pad, respectively. Reductions in the duration of the mill-out portion of the completions were also achieved, as Paramount successfully tested a variety of composite and dissolvable plugs.

Paramount also continued to refine completion designs with controlled tests in perforation clusters, fluid viscosity, pump rate, fracture sequencing and landing zones. The 7-22 Kaybob pad included permanent fiber optic installations on two of its wells, which remain intact for future production tests. The fiber optic system was utilized in real time to assess the distribution of fluid and sand for specific perforations designs. The analysis from the 7-22 Kaybob pad fiber optic system was immediately incorporated in well completion designs for the 4 (4.0 net) wells on the 10-35 Kaybob Smoky Duvernay pad and the 5-29 Duvernay well at Willesden Green.

In July 2018, Paramount sold its oil and gas properties at Resthaven/Jayar for $340 million to Strath Resources Ltd. (ʺStrathʺ). Total consideration included $170 million cash, 85 million common shares of Strath and 8.5 million warrants to acquire Strath common shares. Sales volumes for the properties in 2018 prior to the sale averaged approximately 5,000 Boe/d, on a restricted basis.

Sales volumes at Karr in the second quarter of 2018 were impacted by approximately 1,800 Boe/d as a result of planned and unplanned outages at a third-party processing facility. Second quarter sales volumes and netbacks at Karr are summarized as follows:

New wells are maintaining higher condensate rates for longer periods after initial start-up resulting in higher than expected per-well condensate production. To maximize cash flows, Paramount is prioritizing condensate production at its Karr 6-18 compression and dehydration facility (the ʺ6-18 Facilityʺ), fully utilizing liquids handling capacity and managing natural gas production by restricting flow rates. The Company is on target to complete debottlenecking projects at the 6-18 Facility and new trucking facilities that will increase Karr area raw liquids handling capacity to approximately 15,000 Bbl/d by the end of 2018.

Following the completion of an expansion to condensate stabilization capacity at a third-party facility in May 2018, the majority of liquids volumes at Karr are now being delivered into pipelines, which provide cost savings. The Company is continuing to truck a portion of liquids production in excess of available pipeline and stabilization capacity to maximize cash flows.

The Company executed its first high intensity well completion on a new Lower Montney horizontal well to test the deliverability of the zone. This well was flow tested in line in July 2018 and is currently shut-in for tubing installation. In the five days prior to being shut-in, the well averaged 1,776 Boe/d of test production at the wellhead on a restricted basis, with a 62 percent condensate ratio(1). Preliminary results from this well are encouraging, and Paramount is in the process of quantifying the number of Lower Montney locations on its Karr lands. No locations have been recognized in the Lower Montney for Paramount's Karr development to date.

Test results from the five Montney wells on the 1-2 Karr pad to date have been in line with expectations. These wells will be brought on full production in the third quarter following the installation of permanent production facilities.

The expansion of natural gas capacity at the 6-18 Facility from 80 MMcf/d to 100 MMcf/d is substantially complete. The expansion will be tied-in and commissioned as the liquids handling projects are completed and the incremental capacity is required.

To support growth at Karr, Paramount has sanctioned the construction of a Company-owned and operated natural gas processing facility to be built alongside the current 6-18 Facility. The project will add 50 MMcf/d of natural gas processing capacity and 30,000 Bbl/d of condensate stabilization capacity. The Company is currently placing long-lead time equipment orders to meet the project timeline for start-up in the second half of 2020.

Paramount's production base at Karr includes 27 (27.0 net) horizontal Montney wells from the Company's 2016/2017 capital program (the ʺ2016/2017 Karr Wellsʺ). These 27 wells were part of the Company's initial drilling and completion program employing new well designs with longer lateral sections and high intensity fracks. The following table summarizes the performance of the 2016/2017 Karr Wells:

Royalty rates for the Karr development increased in the second quarter of 2018 compared to the same period in 2017 primarily as a result of fully utilizing new well royalty allowances for a portion of the 2016/2017 Karr Wells. New wells from the Company's 2018 development program will continue to benefit from a five percent initial royalty rate up to the maximum allowance.

Drilling operations for the 2018 capital program commenced at the 9-3 Wapiti pad in January, with all 11 wells being drilled by the end of July. These wells are targeting the Middle and Lower Montney formations at varied well spacings to collect additional reservoir performance data for future development. In the fourth quarter of 2018, six of these wells are scheduled to be completed and drilling operations are scheduled to commence on a new 12-well Wapiti pad. These Wapiti Montney wells are similar in design to the recent Karr development wells and are expected to have similar liquids-rich production profiles. These new Wapiti Montney wells will be produced through a new 150 MMcf/d third-party processing facility, which the operator plans to commission in mid-2019.

Paramount has received regulatory approval for a water disposal well at Wapiti to support its development. Injection and fall-off tests were conducted to assess the well's disposal capacity over the 200 meter completed interval. Step rate test results exceeded 7,500 cubic meters per day without reaching maximum injection pressure and the long-term injection capacity of the well was confirmed by reservoir analysis.  This disposal well will reduce trucking and water disposal fees, resulting in lower completion and operating costs for the Company's Wapiti development.

Kaybob Region sales volumes averaged 39,527 Boe/d in the second quarter of 2018, including 12,024 Bbl/d of liquids. A portion of Kaybob area production was shut-in due to the scheduled turnaround of a third-party processing facility, which reduced second quarter sales volumes by approximately 1,800 Boe/d. The outage was slightly longer than anticipated. Exploration and development capital in the Kaybob Region was $87.7 million in the second quarter of 2018 and $138.9 million for the six months ended June 30, 2018.

Completion operations on the 10-35 Smoky pad were completed in June and all four wells are currently flowing on clean-up at restricted rates. Initial test results are confirming the high liquids yield nature of the area. The Company plans to evaluate the performance of these wells for the remainder of 2018 and resume drilling and completion activities at Kaybob Smoky Duvernay in 2019. Wells on this pad will be produced through the Paramount operated 6-16 Kaybob Smoky natural gas plant (the ʺ6-16 Plantʺ). An expansion of the 6-16 Plant to increase throughput capacity to 12 MMcf/d of liquids-rich natural gas is expected to be operational by the end of August 2018.

The Company's 2018 capital program at the Kaybob South Duvernay development includes two multi-well pads. The 7-22 South Duvernay pad was completed and all 5 (2.5 net) wells are currently flowing on clean up at restricted rates through temporary facilities awaiting the installation of permanent production equipment. Over their initial 31 days on production, these wells averaged a restricted 1,251 Boe/d of gross production per well, including 56 percent condensate volumes, with an average condensate to gas ratio of 216 Bbl/MMcf.(2) Drilling operations for 5 (2.5 net) wells on a new South Duvernay pad are scheduled to commence by the end of the third quarter.

Second quarter 2018 sales volumes at the Kaybob Montney Oil property were 9,640 Boe/d, approximately 60 percent liquids. To date, eight (8.0 net) wells in the Company's 17-well Kaybob Montney Oil capital program for 2018 have been completed and brought on production. These new wells are currently producing at restricted rates pending the installation of additional liquids handling infrastructure later in the third quarter. Drilling operations will commence later in August for the remaining 9 (9.0 net) wells in the 2018 program.

Development activities in the Central and Other Region are focused on the 5-29 Duvernay oil well at Willesden Green. This well was completed in July and is being flow tested. Pressure test results from the 5-29 well indicate high over-pressure in the reservoir. The pressure data has confirmed that an over-pressure, high oil deliverability reservoir is present on the majority of the Company's Willesden Green Duvernay acreage.

Paramount expects 2018 average annual sales volumes to range between 88,000 Boe/d and 92,000 Boe/d (approximately 37 percent liquids). Production in the third quarter will be impacted by scheduled turnarounds at Paramount's operated 8-9 facility in Kaybob and a third-party facility in Karr, as well as the Resthaven/Jayar sale. The impact of these events will be largely offset by bringing onstream the new pads at Karr and Kaybob, the Duvernay well at Willesden Green and several other wells throughout the third quarter. Sales volumes are expected to increase in the fourth quarter.

Paramount's second quarter 2018 results, including Management's Discussion and Analysis and the Company's Consolidated Financial Statements can be obtained at: http://files.newswire.ca/1509/ParamountQ2-2018.pdf

Such forward-looking information is based on a number of assumptions which may prove to be incorrect. Assumptions have been made with respect to the following matters, in addition to any other assumptions identified in this document:

The foregoing list of risks is not exhaustive. For more information relating to risks, see the section titled "RISK FACTORS" in Paramount's current annual information form. The forward-looking information contained in this document is made as of the date hereof and, except as required by applicable securities law, Paramount undertakes no obligation to update publicly or revise any forward-looking statements or information, whether as a result of new information, future events or otherwise.

In this document "Adjusted funds flow", "Netback", "Net debt (cash)" and "Exploration and development capital", collectively the "Non-GAAP measures", are used and do not have any standardized meanings as prescribed by International Financial Reporting Standards.